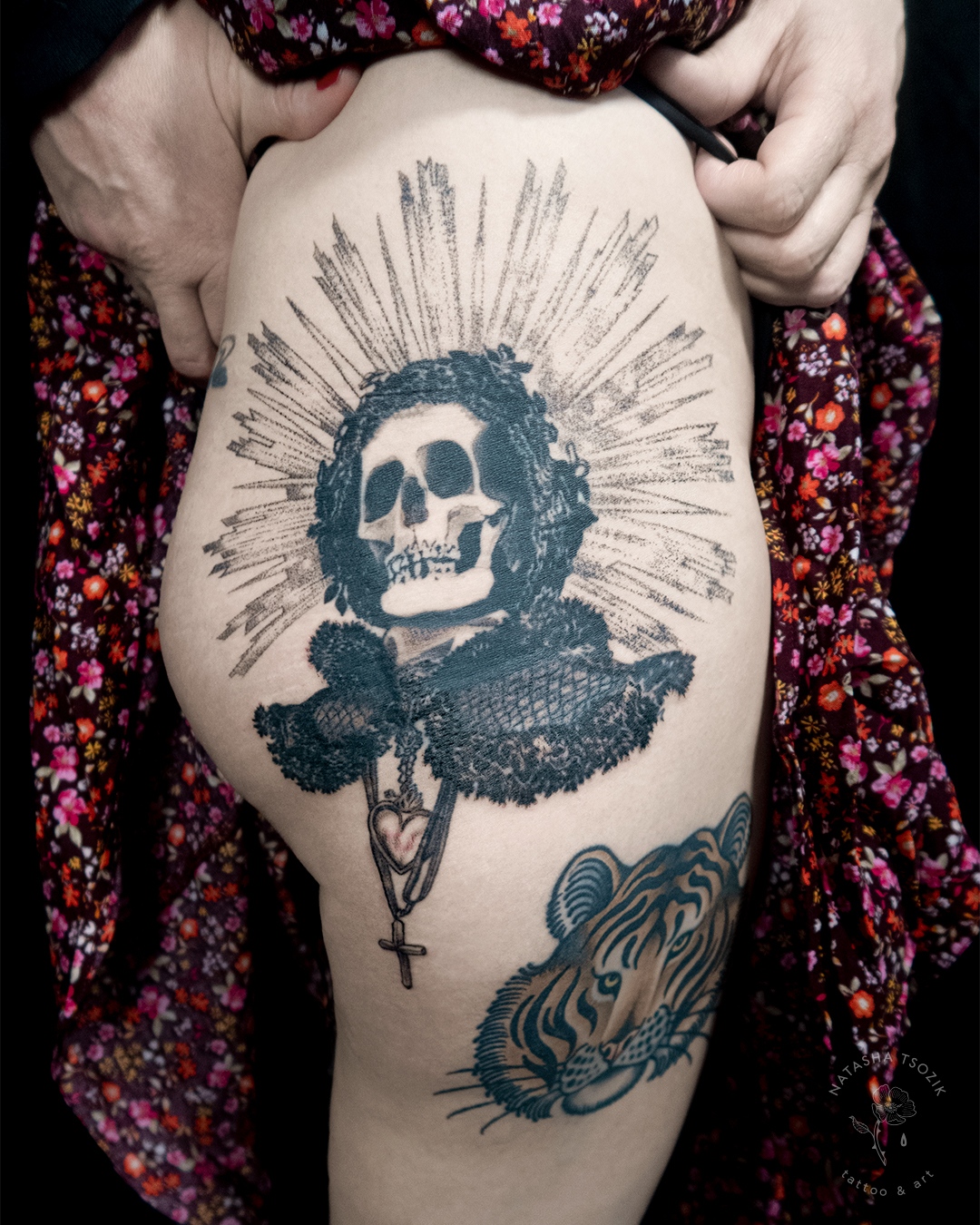 An extraordinary cultural phenomenon of Catacomb Saints is at the heart of this tattoo project. Driven by incredibly rich in both: history and decorations, I got lost in time working on the design. And it was worth it! An eternal source of inspiration for me is the book﻿ "Heavenly bodies: cult treasures & spectacular saints from the catacombs" by art historian Paul Koudounaris﻿.

C. and I had been working on this concept for quite a while. It was important to capture every detail of the image of a Catacomb Saint﻿ named St Notburga — the embodiment of strength and kindness. Special attention was paid to the decorations of the skeleton: the collar, her headdress with divergent rays, and a heart-shaped pendant.

All those laсe details were quite challenging to draw and tattoo. Though the light rays were originally crafted in gold I decided to tattoo them using the stipple technique, depicting them basically with small dots. In order not to make that part the main focus. 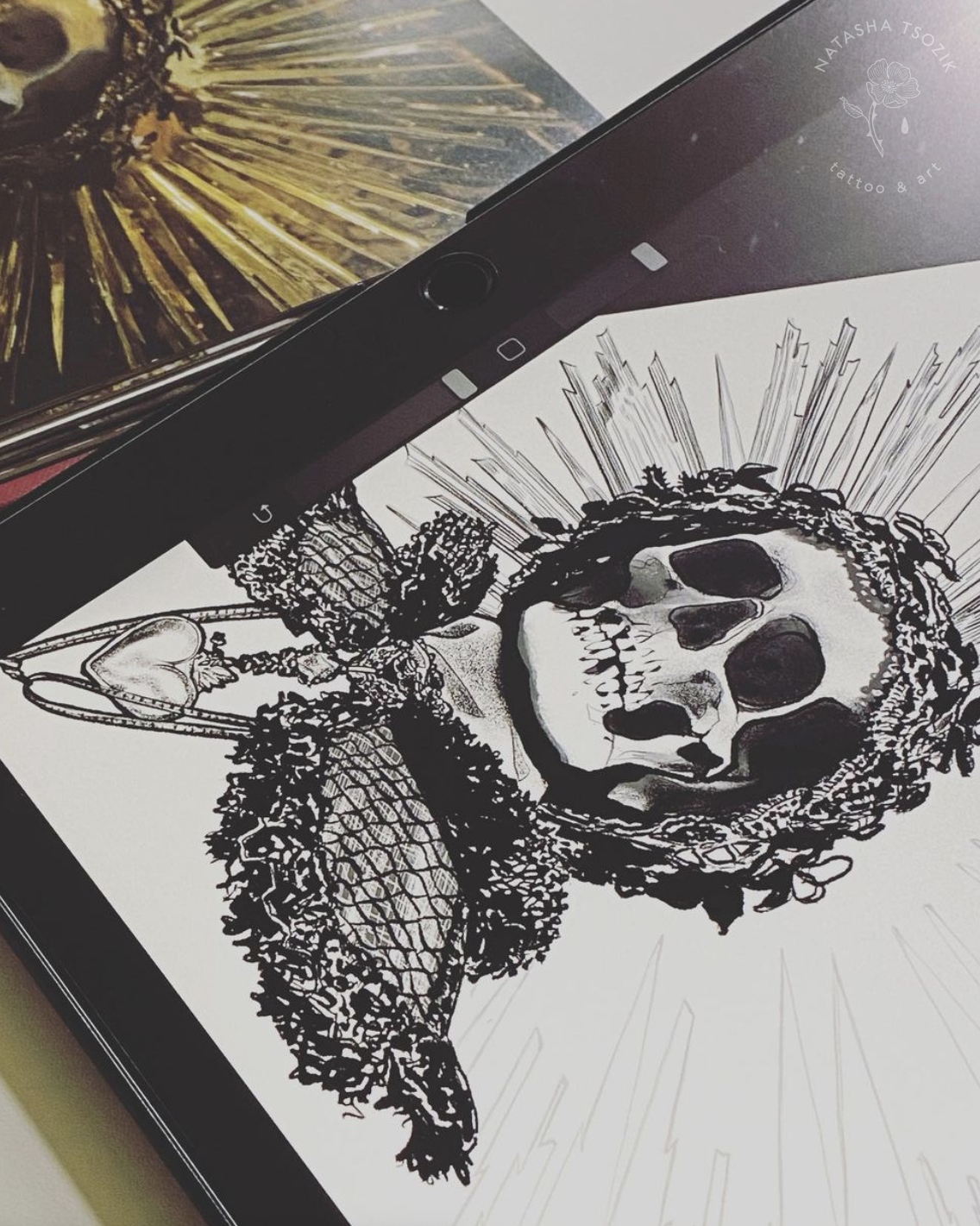 Join me to discover the story about Catacomb Saints and St Notburga herself. 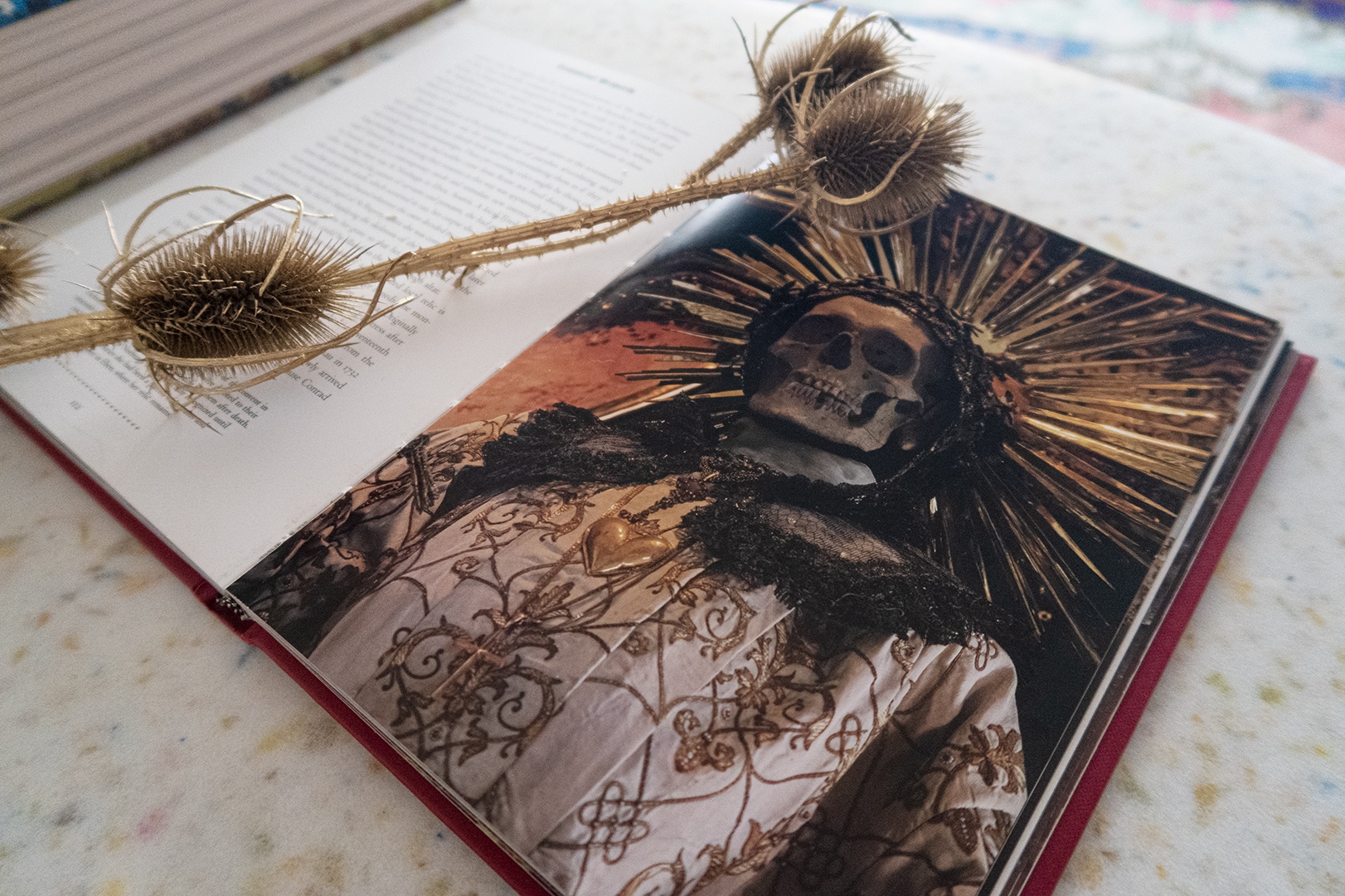 The Resurgence of a Catholic Church

On May 31st, 1578, vineyard workers in Rome found a passageway that led into an extensive network of long-forgotten catacombs beneath the Via Salaria (an ancient Roman road in Italy). The Coemeterium Jordanorum (Jordanian Cemetery) and surrounding catacombs were burial sites from the earliest days of Christianity, dating from between the first and fifth centuries AD.

Catacomb saints, or Katakombenheiligen, were the bodies of anonymous ancient Christians that were taken over the alps from Italy into German-speaking regions during the 17th and 18th centuries as a balm for the faith that had been wounded by protestant reformation. Whoever they might have been over a millennium ago, they now were given the glittering personas of saints. The skeletons were carefully reassembled, lavishly decorated with gold and precious stones, and richly dressed in fantastic costumes, wigs, crowns, jewels, and armor, and posed in elaborate displays inside churches and shrines as reminders to the faithful of the heavenly treasures that awaited them after death.

By the 19th century, many of the fakes had been discovered. Some were stripped of their finery and destroyed while others were placed in storage.

Paul Koudounaris revived interest in the catacomb saints with his 2013 book Heavenly Bodies. In publishing the book, Koudounaris sought to find and photograph each of the extant saints. 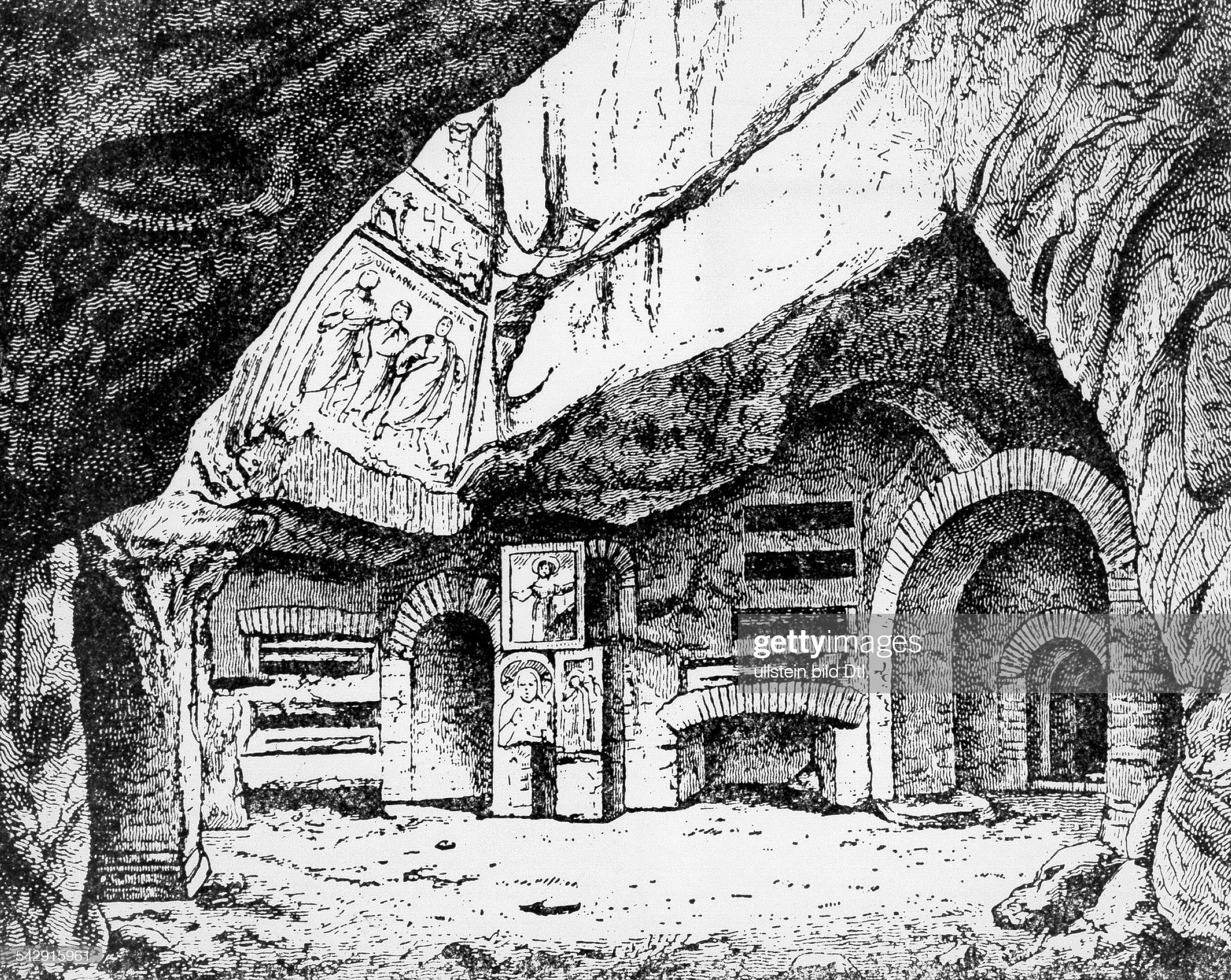 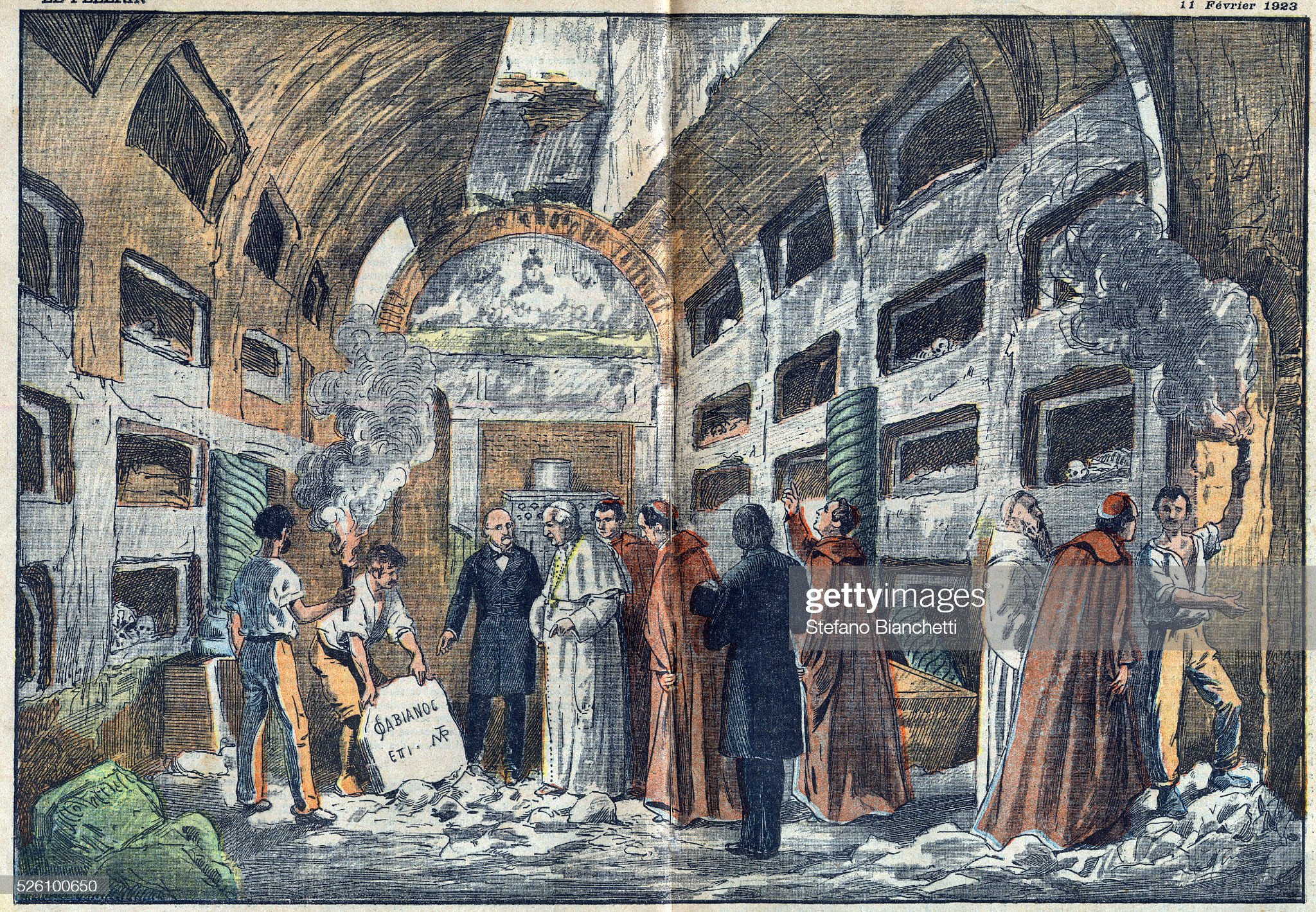 Giovanni Battista de Rossi rediscovered the catacombs of Calixtus, including the Crypt of the Popes, in 1854. Illustration from 1923.

The Story of St Notburga

The Catacomb Saints gained much of their status through accounts of their associated miracles. Tales of miracles attributed to a martyr’s bones were kept in ‘miracle books’, which faithfully recorded the alleviation of ailments.

Among them was St Notburga in Eben, Austria. The legends have it that Notburga performed three miracles﻿, each reflecting a different aspect of this saint. The cult of St. Notburga was not officially recognized until Pope Pius IX canonized Notburga as a saint on March 27, 1862. But for the centuries she had been a patron of servants and the poor in Eben, where her relic remains. She had given instructions that upon her death, which occurred in 1313, her corpse should be sent off in an unnamed cart and buried wherever the oxen decided to stop. This turned out to be at the local chapel of St. Rupert, where she was consequently inhumed with honors. The fad for displaying the skeletons of the catacomb saints later spurred local authorities to open her grave so that her remains, robed at the expense of a local noble family, could be placed to the chapel's high altar.

The feast day of St Notburga is September 13, in some regions also the 14th.

↩︎ Back to all tattoos﻿