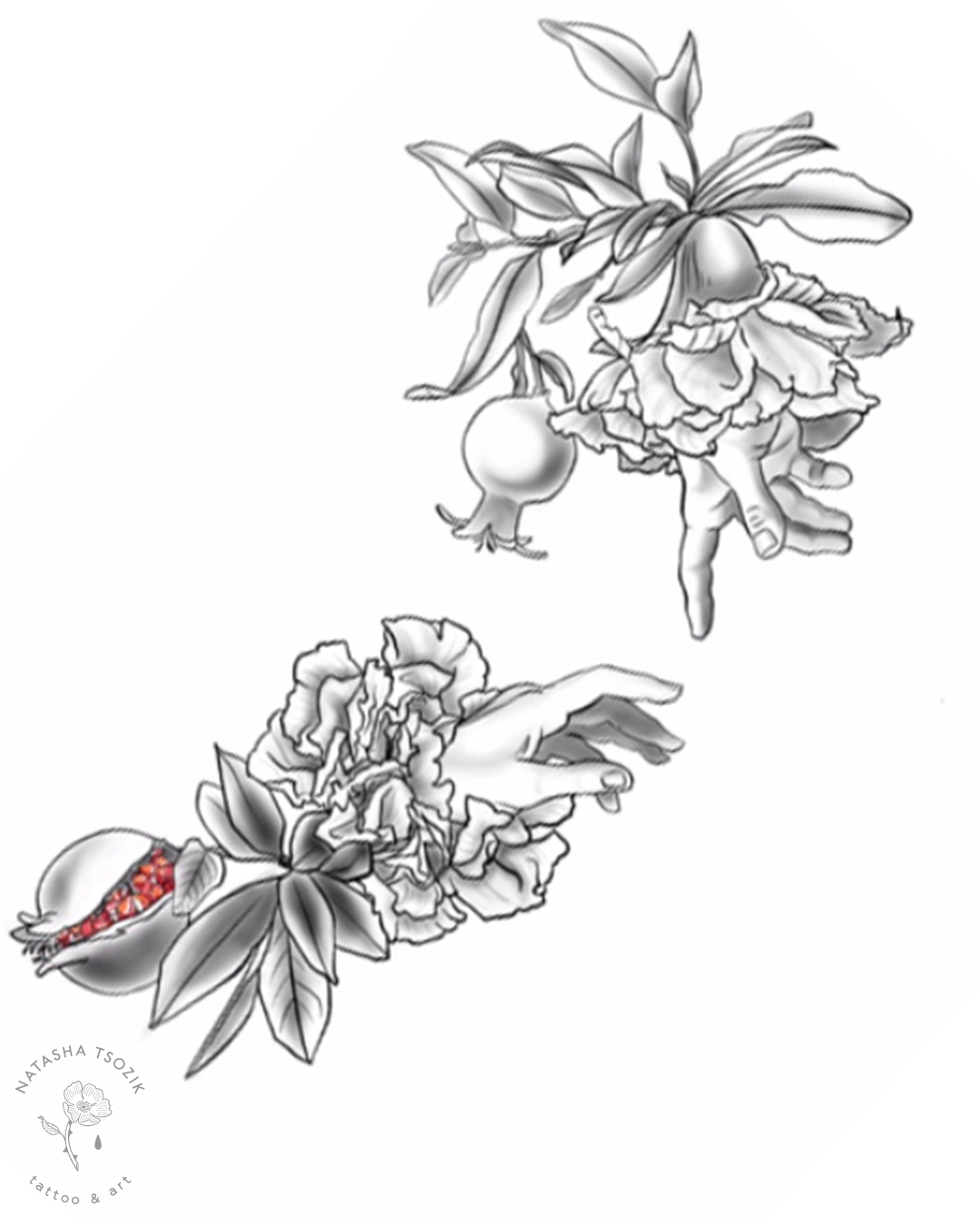 A tribute to the Renaissance—Tattoo projects inspired by Michelangelo's art. Embodying the client's idea, I had a chance to dive into the myths of ancient Greece and the main subjects of the master's art.

We started with a contemporary view of David's image. The warning glare of the young man is covered with a crimson blindfold. 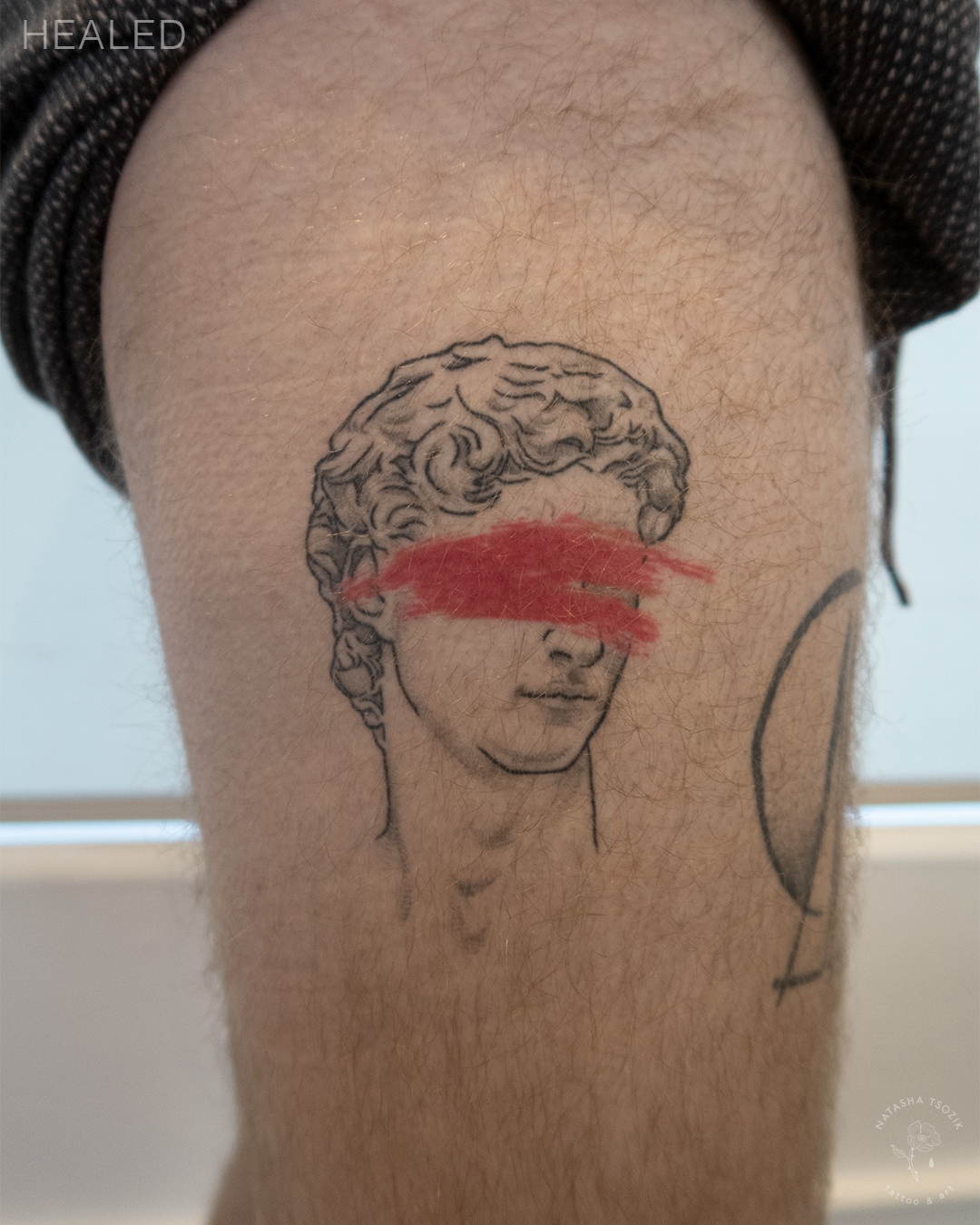 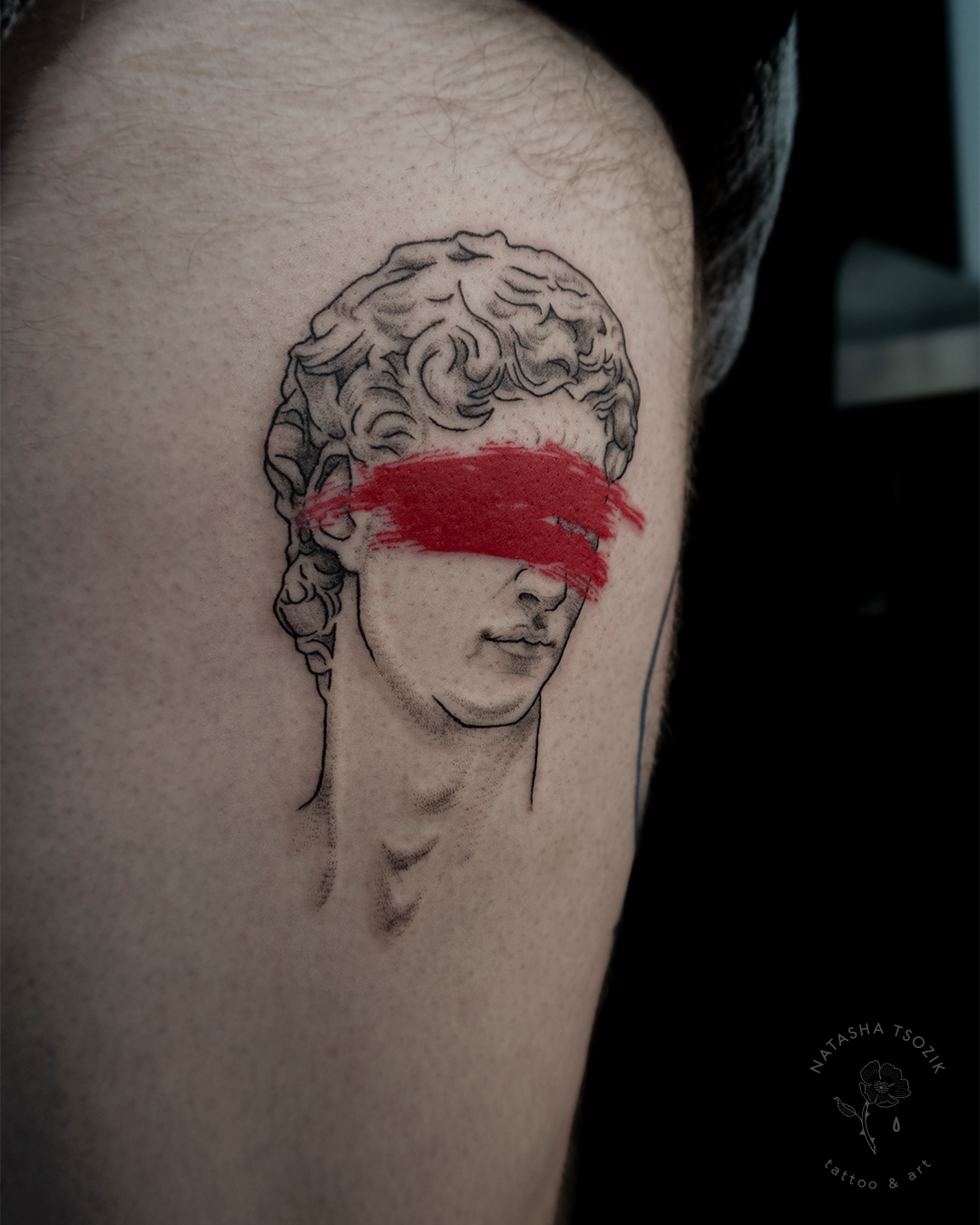 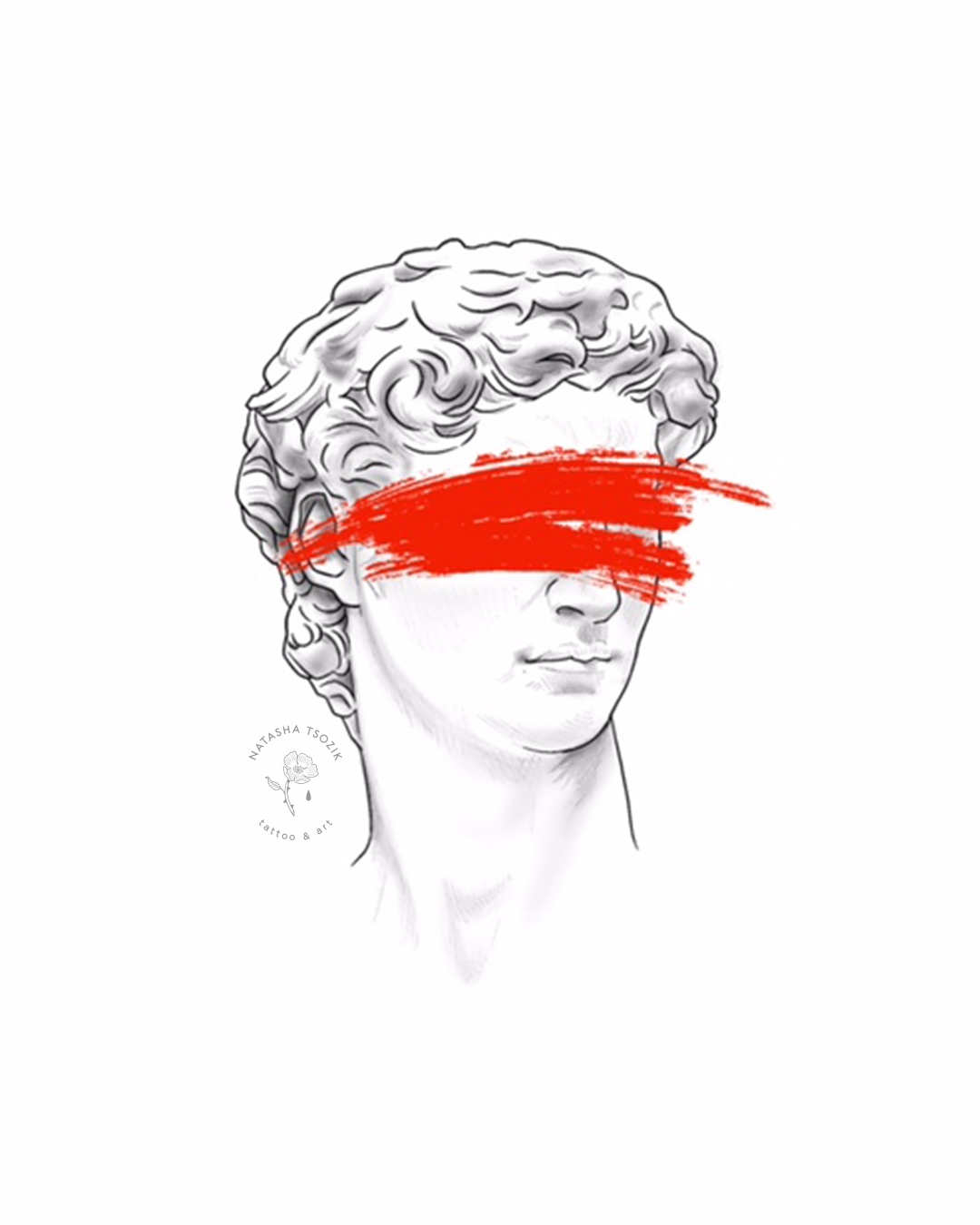 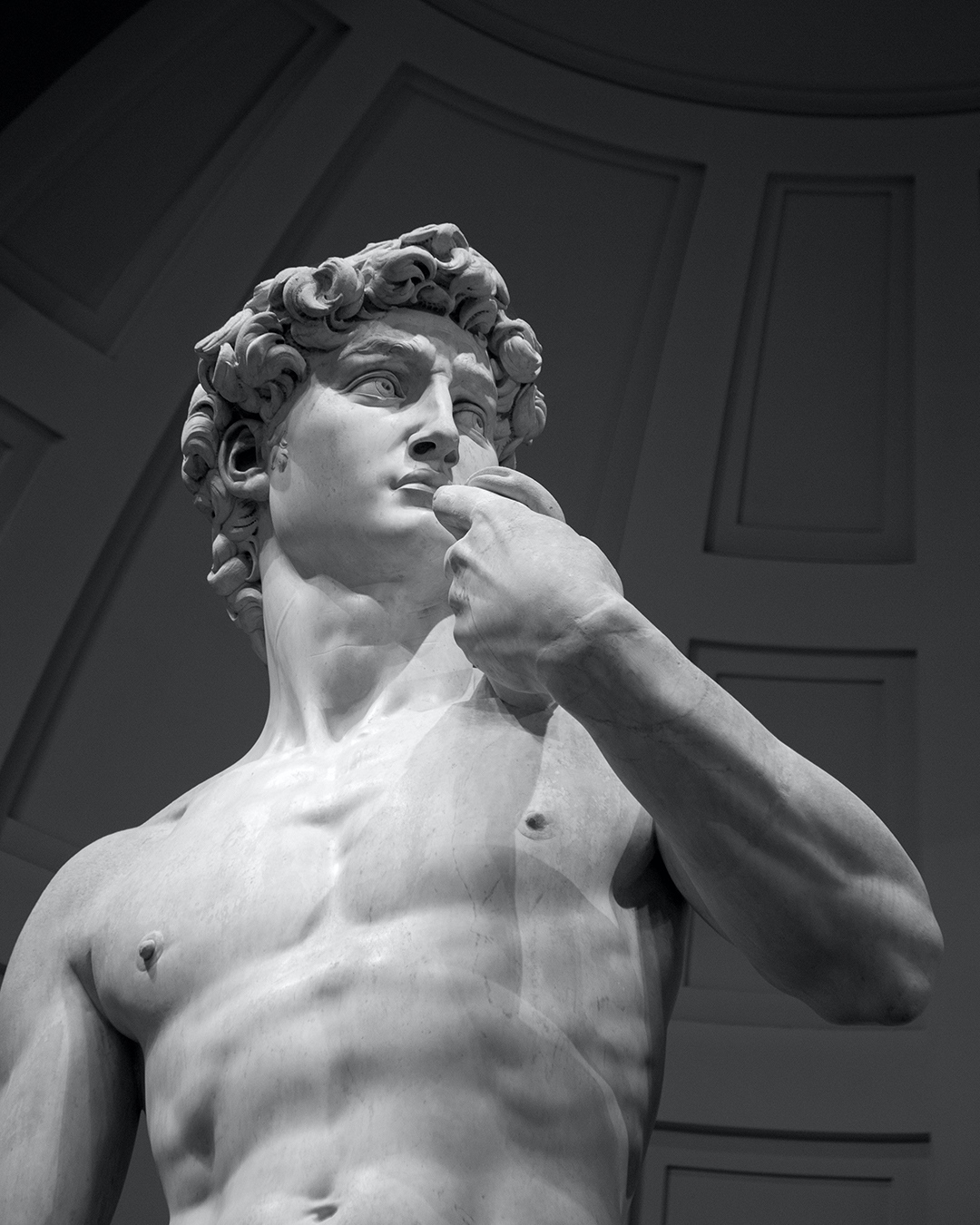 Michelangelo's sculpture of David is one of the most famous objects in the history of art. Casts of David's striking facial features can be found all over the world and are continually studied by artists working in a range of mediums.

Statue represents the biblical hero of David, who defeated Goliath with the help of ingenuity and dexterity. It is a lesson of courage, faith, and overcoming what seems impossible. As for the blindfold, let's keep it a client's secret.

For the next project, perhaps the most breathtaking painting was chosen— "the Creation of Adam". Fresco captures the scene of God breathing life into a man. Guided by the client's ideas, I managed to recreate a well-known art piece into a unique tattoo. Using floriography and metaphor language I garnished Adam’s creation with references to the legend of Persephone.

The divine touch rises from the flower buds and is embellished with gem pomegranates. In ancient Greece, the pomegranate was considered an image of divine food, the hope of immortality, which is explained in the myth of Persephone.﻿ 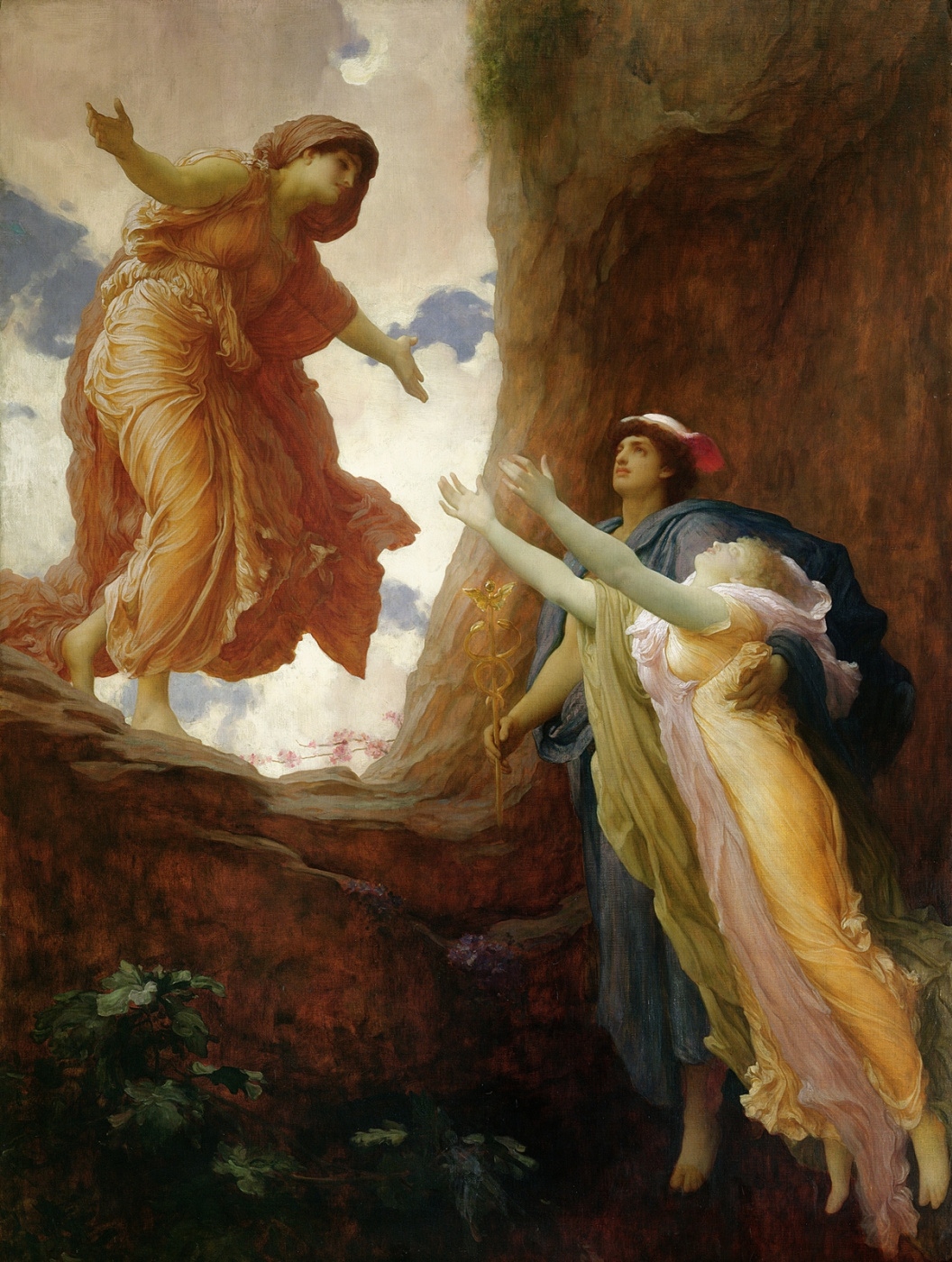 According to legend, Hades secretly fed Persephone pomegranate seeds, which was a symbol of marriage. Bound by unbreakable bonds, Persephone is forced to return to the kingdom of Hades. Ever since she spends two—thirds of the year on earth with her mother Demeter, and the remaining third with her husband in the realm of shadows. Thus, this makes Persephone not only the goddess of spring but also the image of the immortality of the soul. In my opinion, a surprisingly unusual but excellent combination with the creation of Adam in the sense of the relationship between life and oblivion.

Thank you C. for choosing me to embody your ideas! 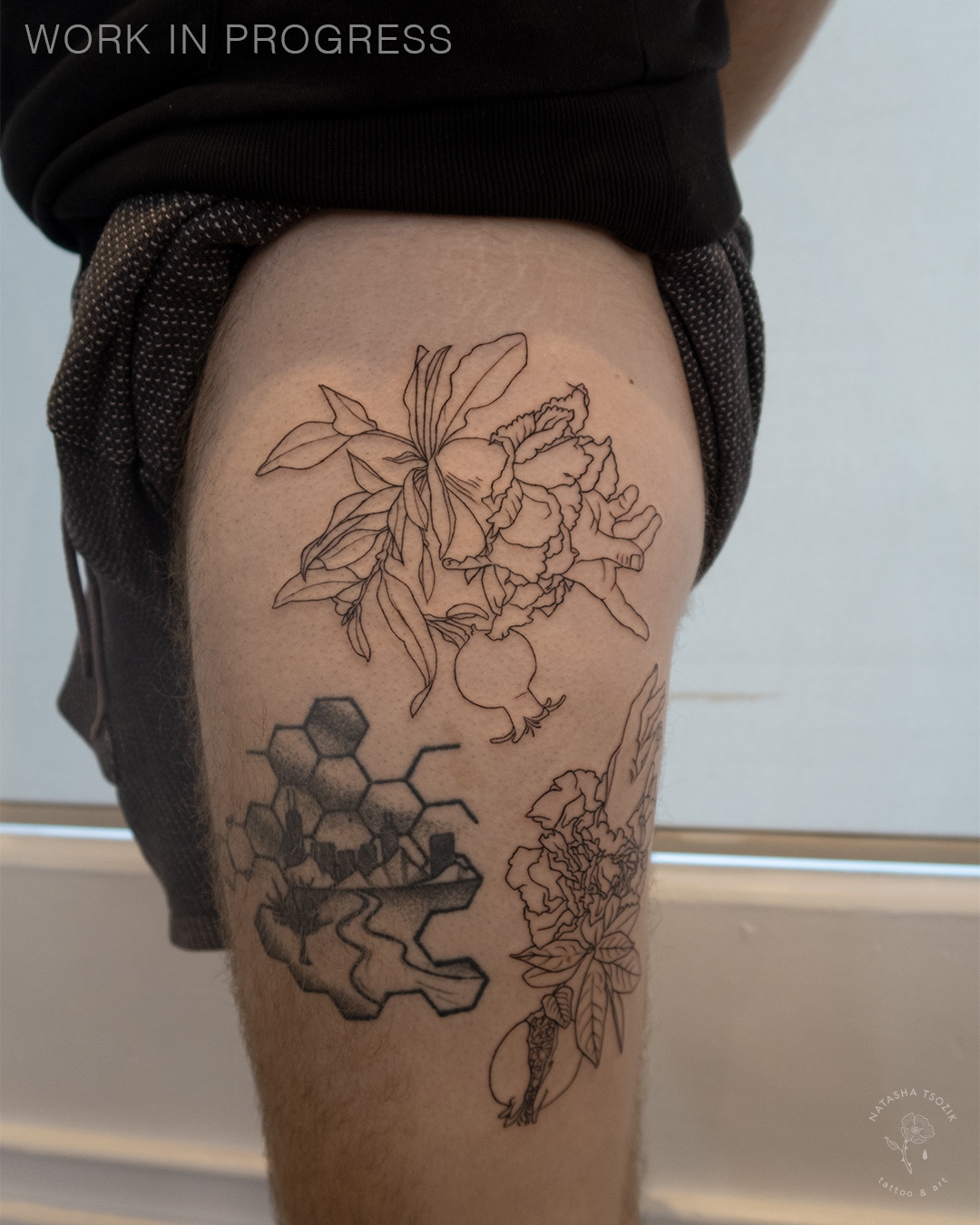 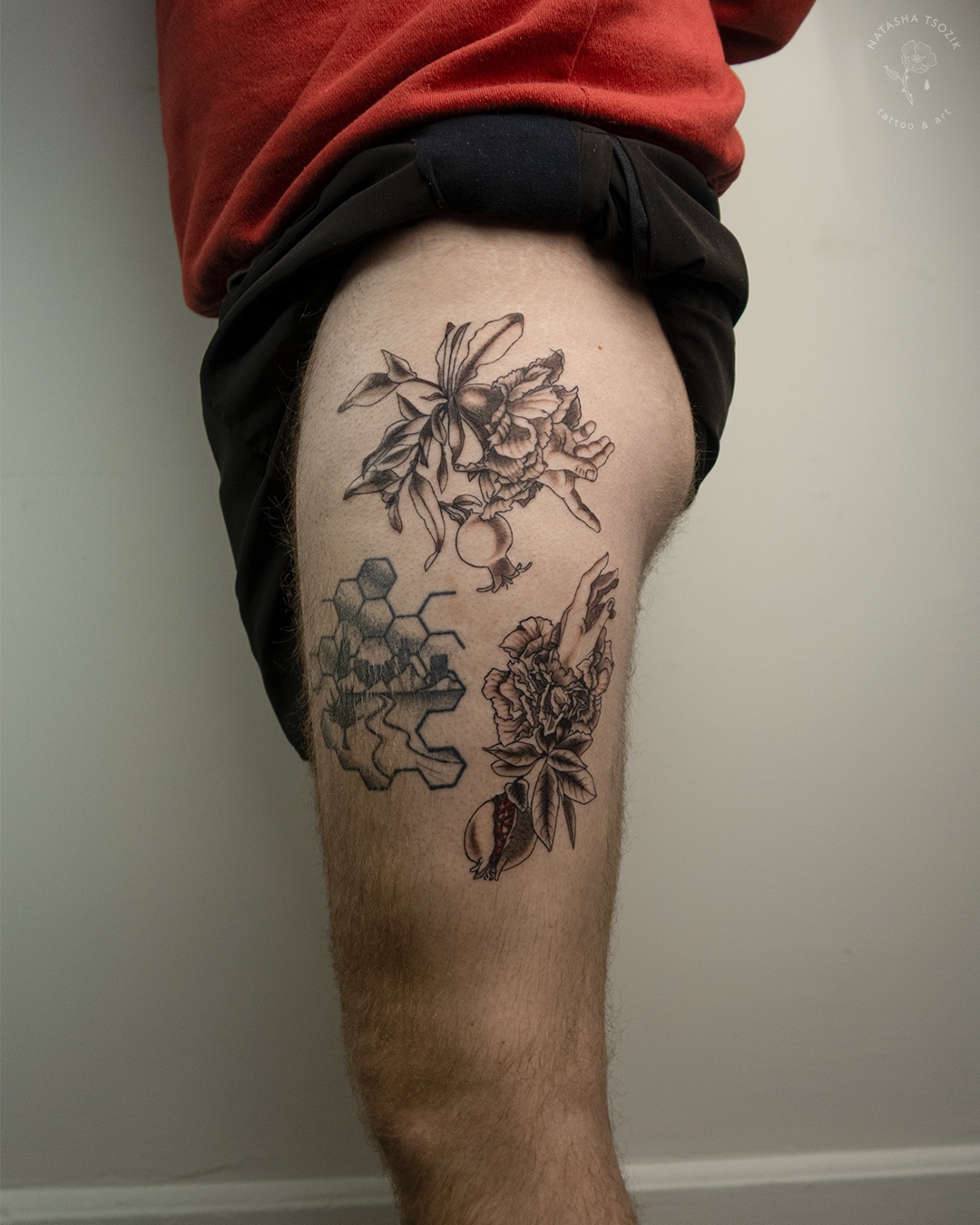 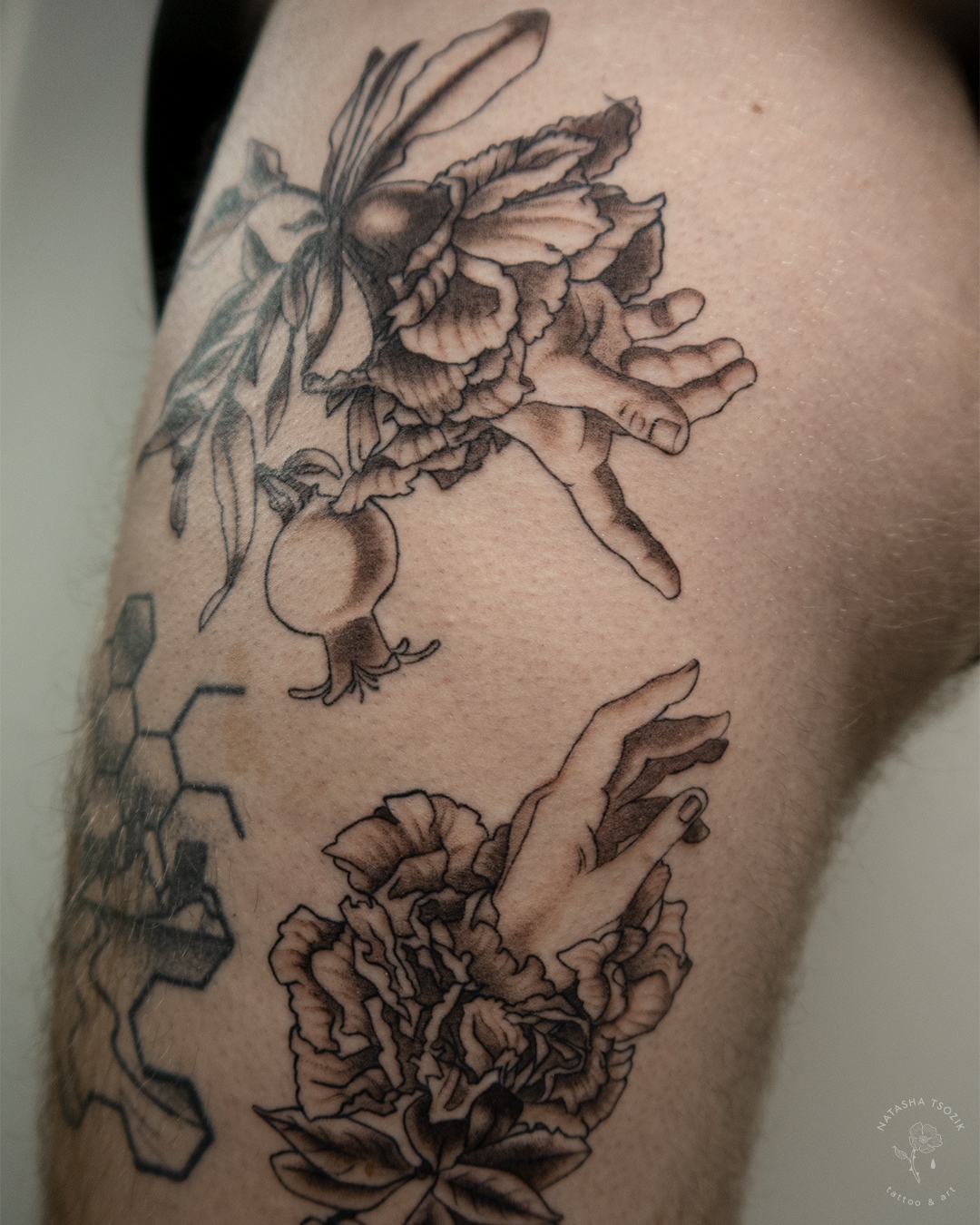 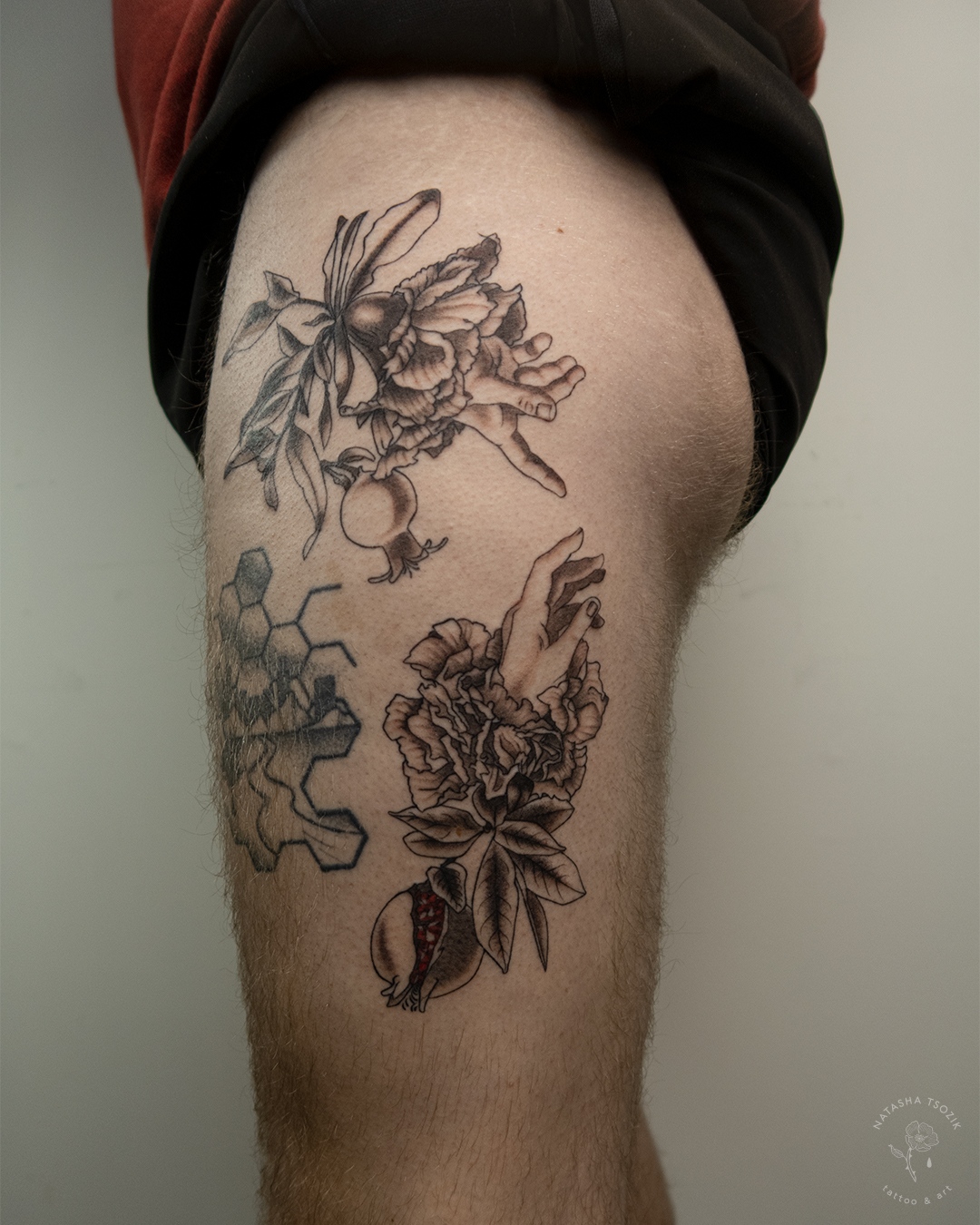 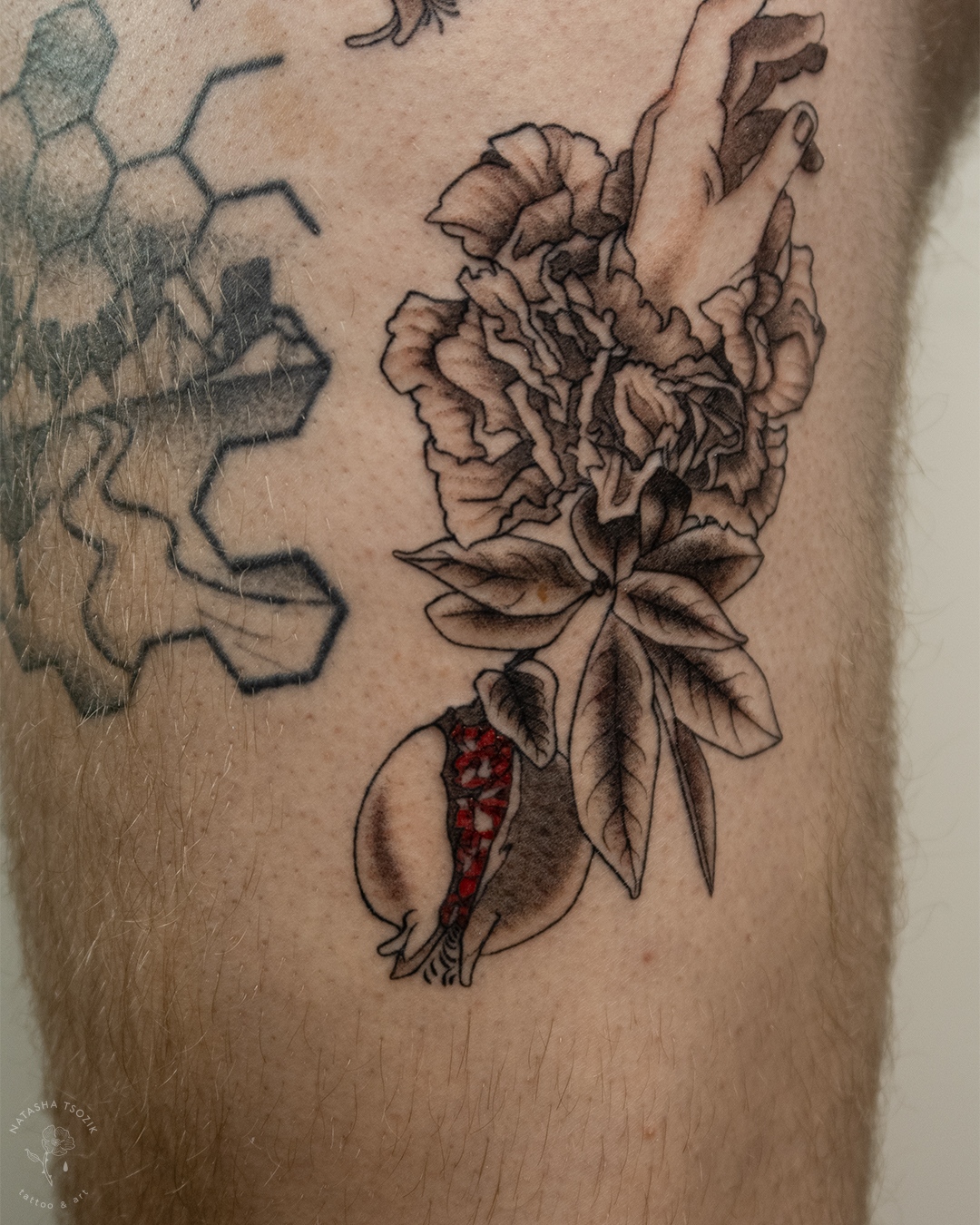 ↩︎ Back to all tattoos﻿