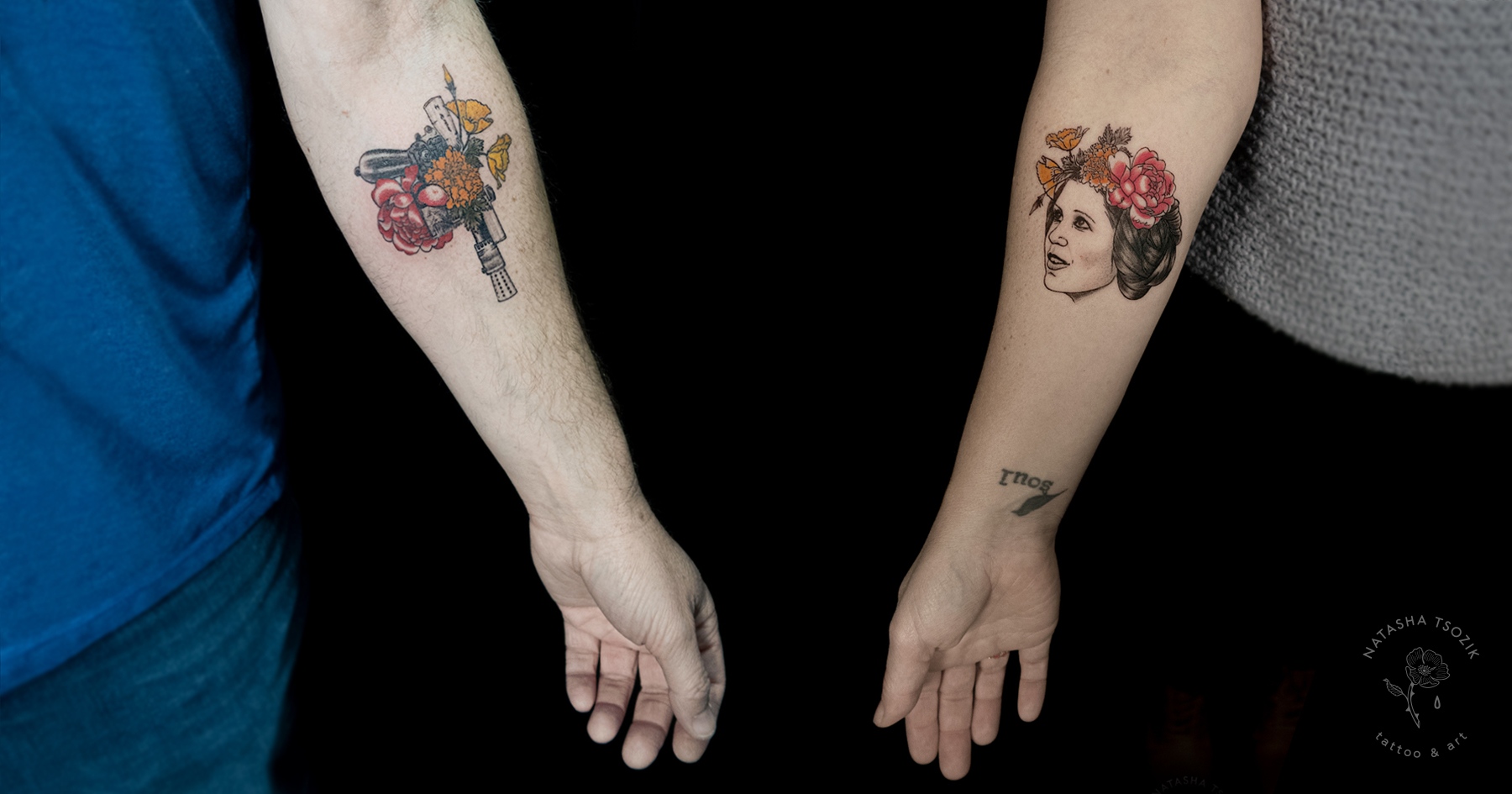 Recently, I was approached by K. and D. with an interesting idea for pairing tattoos. The Star Wars inspired tattoos. Their concept is based on the love story between Princess Leia and Han Solo from Star Wars. A portrait of Leia for K. with words "I love you", and a Han Solo's blaster with "I know" for D. Also, to my great pleasure, there was room for a flower arrangement! I love how designs are different and matching at the same time.

Check out the process of bringing an idea to life.

Working on this project I combined my favorite style and art skills. Portraits, Hair, Star Wars-inspired tattoo flash and Flowers.

I honed my illustrative style by drawing tons of them! Would love to do more portrait tattoos.

You can't imagine how I love drawing hair 🙂 That's why I created these tattoo designs with just hair-dos.

A mix of Russian folklore and Star Wars. Meet Luke-Ivan Tsarevitch and others. ⁣You can find a fairy-tale about each one by clicking on the image or read it below. All the illustrations are available as a tattoo designs.

Short descriptions of the fairytales

Alyonushka – is an orphan. Her little brother doesn't listen to her, drinks water from a hoof print in mud and turns into a goatling.
A king has married this beautiful girl, but a witch, who wants to take away her husband , drowns Alyonushka in a pond and becomes her.
Only her little brother (the goatling) knows the truth and can save Alyonushka and himself from the evil witch.

Sirin (from a greek "Σειρῆνες " ("siren")) – is an edenic bird with a woman's head. It's also depicted with another edenic bird, Alconost, but unlike that bird it sings sad songs.
Sometimes these songs could hurt people (they could lose their mind). That's why in some legends, Sirin has a negative connotation and it's considered to be a dark bird, the underworld messenger.

Baba Yaga – mistress of the forest, animals and birds, almighty prophetic old woman, guardian of the other world's borders. Her name is derived from a Proto-Slavic word "ęgа" representing snakes and reptiles.
Baba Yaga casts spells, flies in a pounder, and ensnares good fellows and children in order to eat them. She dwells of the forest border in a hut on chicken legs, surrounded by a fence made of human bones and skulls.
In ancient times the dead were buried in such little houses located above the ground on tall stumps that looked like chicken legs.
A zombie grandmother lies still and can't see a person who comes from the world of the living (the living and the dead do not see each other). She finds out about a person's arrival by the smell.

Ivan Tsarevich (meaning Ivan, the King's Son) – is one of the main characters of Russian folklore. He is the youngest of three brothers. Koschey (the immortal warlock) stole his bride and in order to save her. Ivan Tsarevich needs to enter the Far Far Away kingdom (i.e. the underworld), pass many trials, and cunningly overcome Koschey.

Do you have a cool idea? Let's discuss it, I'll help you implement it!